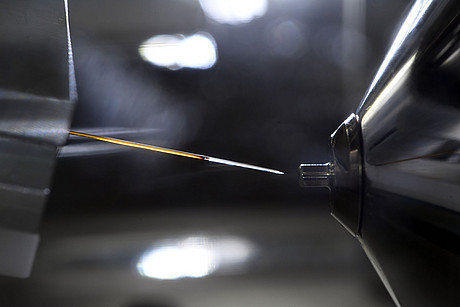 Joint press release by Charité and the BIH, together with the MDC

Multiple myeloma, the most common type of bone marrow cancer in Germany, almost always returns, even after initial treatment success. In the majority of cases, the reasons behind this treatment resistance (e.g., genetic mutations) and the subsequent return of the disease, remain unknown. According to a team of researchers from Charité – Universitätsmedizin Berlin, the Berlin Institute of Health at Charité and the Max Delbrück Center for Molecular Medicine (MDC), it is the increased production of a specific protein which diminishes the cancer’s sensitivity to treatment. Their findings, which have been published in Nature Communications*, open the prospect for new treatment avenues.

Multiple myeloma is a cancer which affects ‘plasma cells’, a type of immune cell found in the bone marrow. This cancer can weaken the immune system, cause kidney damage, and weaken bones, which may lead to fractures. Average survival rates have improved considerably thanks to new treatment options. These include lenalidomide and pomalidomide, drugs which are often successful in forcing the cancer into remission. In nearly all cases, however, the cancer will become increasingly less susceptible to these drugs, meaning it develops drug resistance. When cancer growth eventually resumes despite treatment, the patient’s prognosis is poor.

Using latest improvements for a method known as proteomics, an interdisciplinary team of researchers in Berlin was able to decode a previously unknown mechanism which can cause this type of relapse. “We were able to show that production of CDK6, a cell division-promoting cell cycle regulator, is particularly high once the cancer has become resistant to treatment,” explains one of the study’s two co-leads, Prof. Dr. Jan Krönke of the Department of Hematology, Oncology and Cancer Immunology on Campus Benjamin Franklin. “Based on our data, we believe that CDK6 inhibition could represent a new treatment approach in relapsed multiple myeloma.”

Despite extensive DNA sequencing studies, treatment resistance in multiple myeloma has only rarely been linked to changes at the genetic level, such as gene mutations or gene deletions. “This suggests that the changes taking place within the cancer cell which would explain this relapse must take place at a different level,” says the study’s second co-lead, Dr. Philipp Mertins, an MDC researcher who heads the Proteomics Platform at both the MDC and the BIH. He continues: “The cancer cells' growth potential may also be subject to various means of control at the protein level. Here, we observed this type of effect in relation to the protein CDK6.” The researchers employed cutting-edge mass spectrometry technology in order to establish whether changes at the protein level are responsible for the cancer becoming resistant to treatment. Using both pre- and post-relapse samples from patients with multiple myeloma, the researchers were able to quantify more than 6,000 different proteins.

Comparing cancer cells collected before and after relapse, the researchers found that a range of proteins were present at either higher or lower concentrations post-relapse. Using statistical and bioninformatics analyses, the researchers were able to trace the majority of these effects back to a single protein: cyclin-dependent kinase 6, or CDK6, an enzyme which controls the cell’s entry into the cell division phase of the cell cycle.

As a first step, the researchers used cell cultures to demonstrate that CDK6 plays a key role in the development of treatment resistance in multiple myeloma. “When we artificially increased the amount of CDK6 present inside cultured myeloma cells, they lost their susceptibility to the drugs lenalidomide and pomalidomide,” explains the study’s first author, Dora Ng, a researcher at the Department of Hematology, Oncology and Cancer Immunology on Campus Benjamin Franklin. She adds: “However, when we also added a CDK6 inhibitor, the drugs became effective again and the cancer cells died. This shows that CDK6 inhibition enables at least a partial reversal of the myeloma cells’ treatment resistance.”

The researchers were then able to confirm this effect in an animal model, where the combination of pomalidomide with a CDK6 inhibitor significantly improved the odds of survival. “These data suggest that patients with treatment-resistant multiple myeloma may also benefit from the addition of CDK6 inhibitors,” says Prof. Krönke, a researcher at the German Cancer Consortium’s (DKTK) translational research center in Berlin, who is being funded via the DFG’s Emmy Noether Program. “Further studies will be needed in order to test this hypothesis. One advantage is that some CDK6 inhibitors have already been authorized for use in the treatment of breast cancer.”

The study’s second first author, Dr. Evelyn Ramberger, was responsible for performing the project’s protein analyses. A postdoc at Charité and the MDC/BIH Proteomics Platform, she is convinced that the technology holds enormous benefits for the field of cancer research: “We want to continue pursuing this new approach of using modern, comprehensive protein analyses to study cancer tissues – both in multiple myeloma and other cancers. We hope this will unveil further treatment targets and biomarkers for use in personalized cancer medicine,” she says.

About this study
This project was funded by the German Research Foundation’s (DFG) Emmy Noehter Program. The project was conceived and developed by members of the MSTARS (Multimodal Clinical Mass Spectrometry to Target Treatment Resistance) consortium. Working alongside other Berlin-based partners, research groups from Charité and the MDC pool their outstanding expertise in the field of mass spectrometry to form a ‘research core’. Funded since 2020, the project has received approximately € 5.7 million funding from the Federal Ministry of Education and Research (BMBF).

Mass spectrometry
Mass spectrometry is an analytical technique used to measure the mass of molecules and atoms. The substance to be analyzed thereby transitions as ionized molecules into gas-phase. Once accelerated to a high velocity by an electrical field, these ions are then measured by the mass spectrometer system’s analyzer and their mass/charge ratios are determined. The resulting mass spectrum provides information on a substance’s molecular composition. Mass spectrometry is suitable for the identification, characterization and quantification of a myriad of biomolecules such as proteins, metabolites, sugars and fats, all of which behave differently depending on the precise clinical picture which manifests in a particular patient.

Joint press release by Charité and the BIH, together with the MDC on the potential and scope of proteomic analysis (17.08.2021)

Joint press release by Charité and the MDC on the MSTARS consortium (10.02.2020)

The ‘Proteomics’ Platform (MDC and BIH)