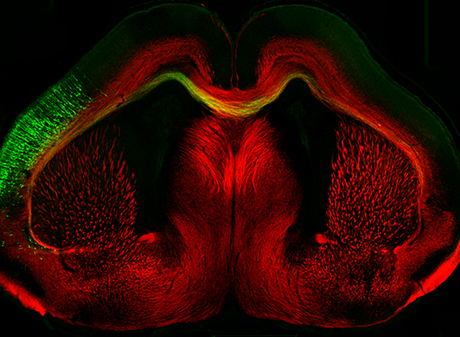 Connections within the Brain

New insights gained into how neuronal connections are formed

Proteins play an important role in establishing connections between the nerve cells, particularly the protein called SIP1. In its absence, the growth of neuronal connections is delayed and their branching is affected. The result: emergence of diseases with motor and mental impairment such as Mowat Wilson syndrome. Scientists at the Charité – Universitätsmedizin Berlin have now shed new light on the underlying molecular mechanism. The results of the study are published in the current edition of the journal Neuron*.

The human brain with its highly complex structure makes it possible for humans to master language, mathematics, art and communication, in addition to numerous other capacities. Of decisive importance here is that the nerve cells be able to properly communicate with each other. Billions of neurons exchange information via nerve fiber connections - the axons and dendrites. If these connections are missing or insufficiently formed due to developmental disorders, the result is a serious impairment of intellectual or physical abilities. The SIP1 protein is coded by the gene of the same name and initiates the functions of a series of further genes. At the molecular level, SIP1 influences the formation of neuronal connections. The scientists and researchers collaborating with Prof. Dr. Victor Tarabykin, Director of the Institute for Cell and Neurobiology, have now succeeded in demonstrating this direct correlation in the animal model .

Certain cell components are required for nerve cell connections to form properly, i.e. the microtubules. These form an intracellular scaffolding, which in turn gives the cells their characteristic shape and Stucture. Microtubules also serve as helper molecules for numerous cellular functions. In neurons, the SIP1 protein activates the formation of another protein called ninein. Ninein binds the microtubules within the axons and stabilizes these structures. "In the presence of ninein the microtubules do not break down easily and grow at a normal rate thus helping in the growth of the axon," explains Swathi Srivatsa, lead author of the study. "However, in the absence of Sip1, the levels of ninein in the neuron is reduced resulting in unstable microtubules. The microtubules now break down more easily and grow at a slower rate affecting the growth rate and branching of the axon." The ultimate consequence: important neuronal connections can no longer be formed. In the worst case, entire axonal tracts between the various regions of the brain are missing such as the connections between both hemispheres of the brain or from the brain to spinal cord. These latest findings will contribute to achieving a better understanding of the molecular processes involved in the development of the brain and its related connections, and will also pave the way for future studies.

Institute for Cell and Neurobiology
NeuroCure