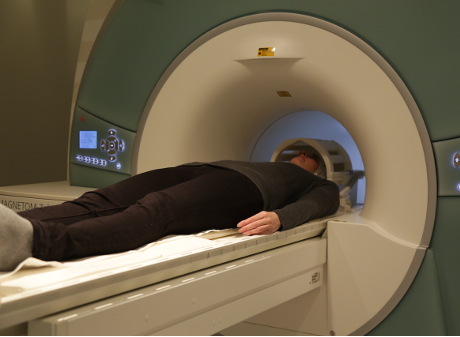 The Clinical Neuroscience Research Group is a newly established research group located at the Experimental and Clinical Research Center (ECRC) on the Charite Campus Berlin-Buch. We use magnetic resonance imaging (MRI) and electroencephalography (EEG) to examine neurocognitive disorders. The research group pursues a translational approach with particular emphasis on the study of large (patient) populations being extensively characterized on the clinical and molecular level (-Omics). First-in-man and first-in-patient studies (phase-I/IIa) are a second focus of the research group.

BioCog ("Biomarker Development for Postoperative Cognitive Impairment in the Elderly")

BioCog is a collaborative research consortium project funded by the EC´s 7th Framework Programme and the Berlin Institute of Health (BIH). More information on the project can be found at http://www.biocog.eu. Apart from coordinating the consortium, the Neuroimaging Research Group currently builds a large imaging database (N = 1200 elderly patients) including follow-up data acquisition. The aim of our group is the development of neuroimaging biomarkers, which provide direct information on brain structure and function, which will allow the detection of relevant aspects of POD/POCD pathophysiology with high sensitivity. Within the BioCog project there is a close collaboration of the neuroimaging research group with different research organizations in Berlin, e.g. Berlin Center of Advanced Neuroimaging (BCAN) and The Max Delbrück Center for Molecular Medicine (MDC) among others.

This is a long-term research project running already since 2007 being funded (until 2018) as DFG Priority Program (Schwerpunktprogramm SPP1226: http://www.nicotine-research.de). Additional funding has been obtained from the European Union/University of Heidelberg for genomewide genotyping of cohort data.  Since 07/2019 the project is funded within the framework of the newly established Collaborative Research Center, Sonderforschungsbereich-Transregio (SFB/TRR 265): Losing and Regaining Control over Drug Intake: From Trajectories to Mechanisms to Interventions: http://www.trr265.de/. Duration of expected funding until 2031.

The consortium (Nicotine: Molecular and Physiological Effects in the Central Nervous System (CNS)) encompasses 24 subprojects and includes projects on animal models for the identification of genetic risk factors, large multicenter database projects with standardized data-acquisition in the general population and relevant clinical populations, statistical projects developing methods to handle complex biological and disease trajectory data as well as neuroimaging and physiological projects studying humans and animal models.
The consortium has established a network comprising basic and clinical research to address questions about:

Dysfunction of the prefrontal cortex and associated impairment of cognitive control contributes to the development, persistence, and severity of substance use disorder (SUD). This was first described by G. Winterer in the 90ies in alcohol-dependent subjects. Difficulties in prefrontally mediated emotion regulation (ER) have been linked to negative emotionality in SUD. ln this project, we will systematically investigate prefrontal dysfunction and ER in tobacco use disorder (TUD). To do so, we will build on the large German National Cohort Nicotine study (CNS) (N = 2396) from the DFG priority program SPP1226 (s.a.) led by one of the Pls (Georg Winterer). Firstly, we will investigate the outcome of subjects with TUD by conducting a 10-year-follow-up of the cohort via online questionnaires. Taking a hypothesis-driven approach, we will test whether distinct parameters of prefrontal function and habitual ER predict 10-year TUD outcome and how prediction is modified by the use of alternative rewards. ln addition, we will apply hypothesis-free multivariate analysis strategies using machine learning algorithms employing the rich longitudinal data structure of the cohort. ln the second part of this project, we will experimentally investigate neural circuits associated with mechanisms of emotion regulation of negative emotions, as well as of drug and alternative rewards in a cohort subpopulation (N = 120). We will specifically test the question of whether prefrontal function during emotion regulation is predictive of nicotine craving during abstinence.

No results? Please also use our central search.